And Now For More Power

We've been an APR dealer since 2005, and having had such a long and storied history, we can honestly say that we have been thoroughly pleased with their software offerings so far. For those who are not familiar with how software works, it is the process of downloading a new file and overwriting the existing code on your factory ECU (while still maintaining the ability to go back to factory settings). This new software alters the maps that control fueling, timing, boost, and a host of other parameters which essentially make it safe to dramatically increase boost levels from stock- netting you a very safe increase in power- in the case of the MQB up to appx 100 hp and 100 ft lbs of torque of over stock.

We happily volunteered to be the guinea pig for the development of APR's latest release on our GLI, traveling to a reputable dyno to get some baseline and modified power figures. Getting the ability to try out the software during real world conditions for as many miles as possible helps the engineers at APR to ensure that everything is working as it should before a final product release. 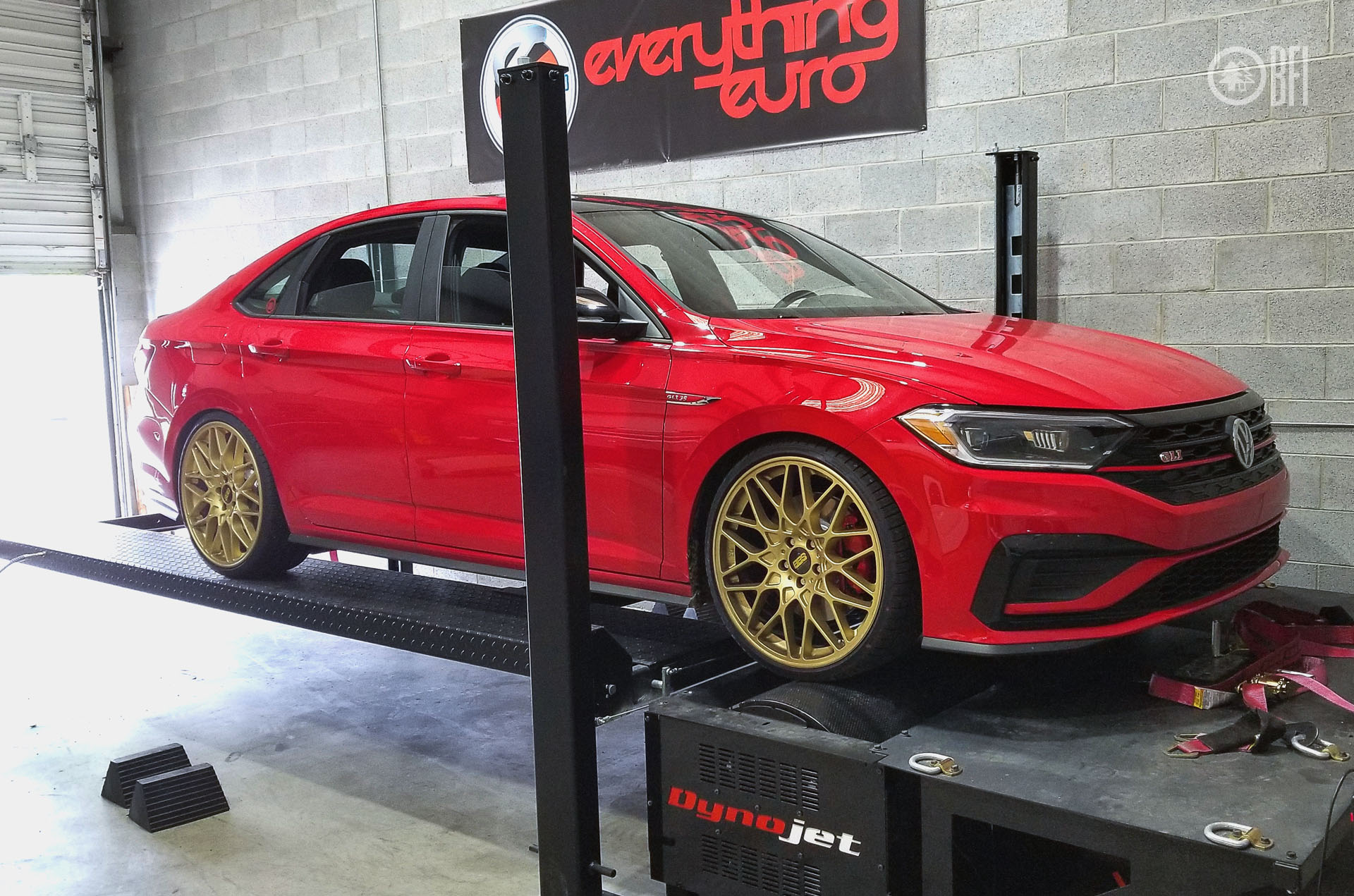 The numbers below are preliminary numbers and do not reflect the final version of the software. Several revisions have been made yet we have not returned to the dyno for additional runs. APR does have other vehicles that are being used for Beta testing in addition to ours. 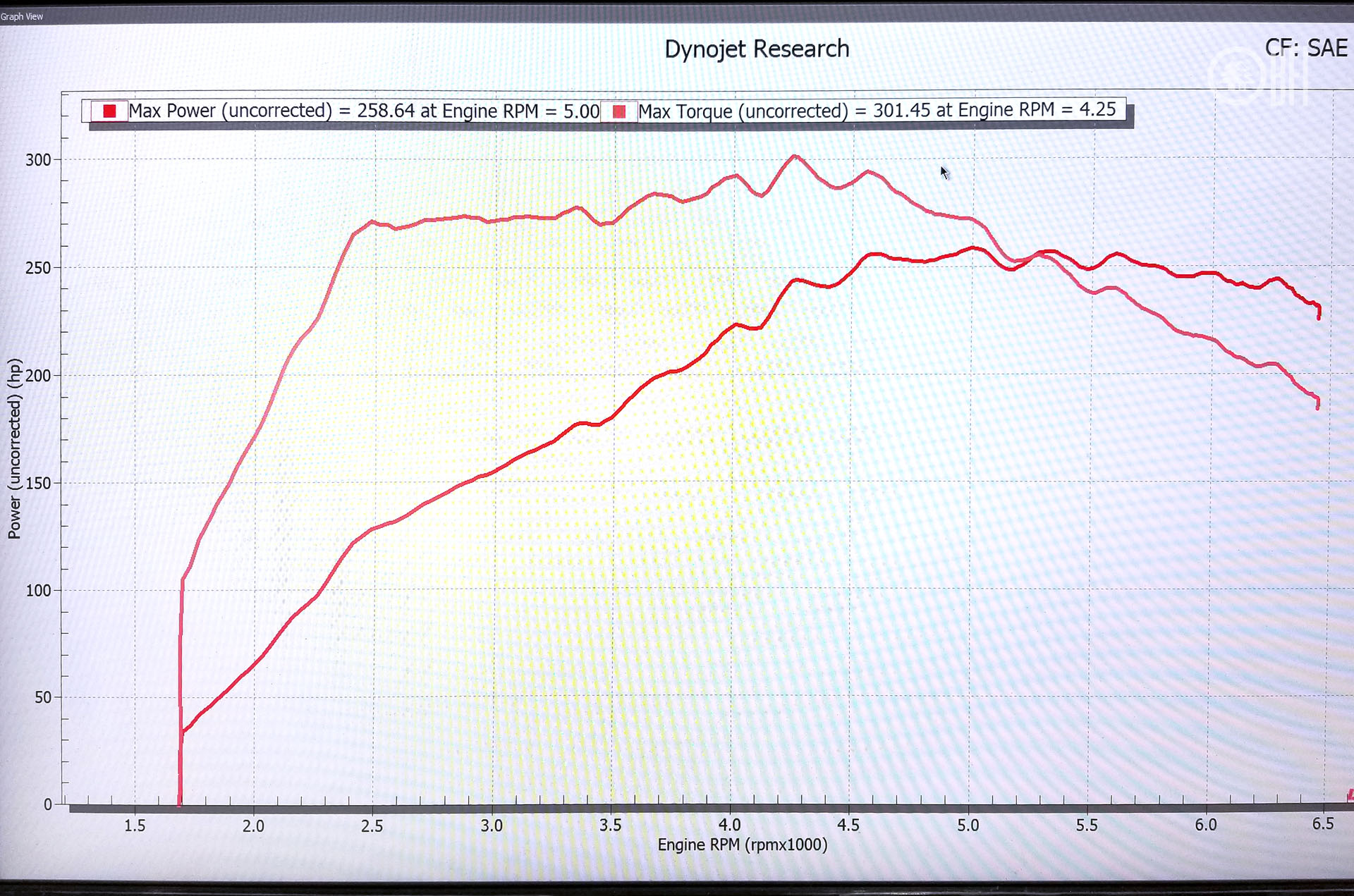 With added power comes the added responsibility of keeping it harnessed. There is no question that the factory engine mounts are nowhere near being up to the task of even just a Stage 1 software upgrade.  You immediately notice the increased and amplified weaknesses that are inherent to the soft hydraulic filled and rubber units.  We've even seen the cast aluminum shatter and completely fail, which besides being a detriment to performance is a safety hazard.

Enter the BFI Performance Stage 1 Engine Mounts.  Over the last 15 years we've become intimately familiar with the ins and outs of how Volkswagen has mated their engines to their chassis. Fortunately for us, they are terrible at making engine mounts that last, and particularly bad at making engine mounts that hold up to the rigors of spirited and performance driving.  We've adapted our approach and improved on everything we have learned over the years to arrive at a solution that is second to none. Our Engine mounts utilize a proprietary encapsulated polyurethane bushing, which is available in two durometers.  These bushings are engineered to offer a substantially increased damping area, while dialing out unwanted NVH.  Often imitated, never duplicated.

All mounting brackets are machined here at Black Forest Industries from billet aluminum and are significantly stronger than the notoriously weak cast aluminum pieces. We feel that these parts are virtually indestructible, to the point we are willing to offer a limited lifetime warranty to the original purchaser.  Bottom line, there are no better mounts on the market.

Shown below is our final prototype (now in production) for the MQB transmission as well as our long since tested MQB engine mount. We have spent many months making sure that the fit and finish was up to our standards. We do not want to be like other companies, releasing something before it has been tested, making apologies and revisions after the fact. 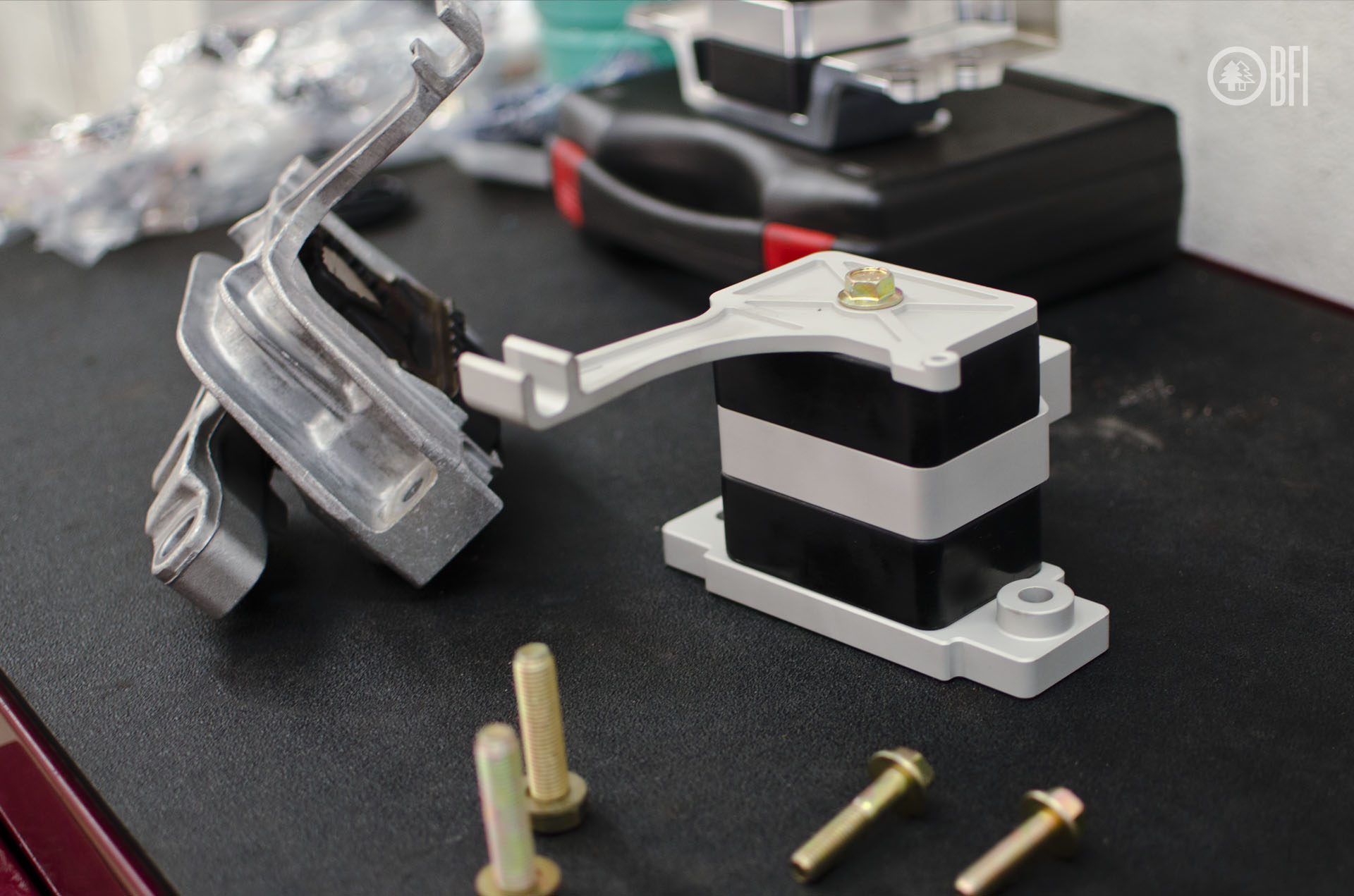 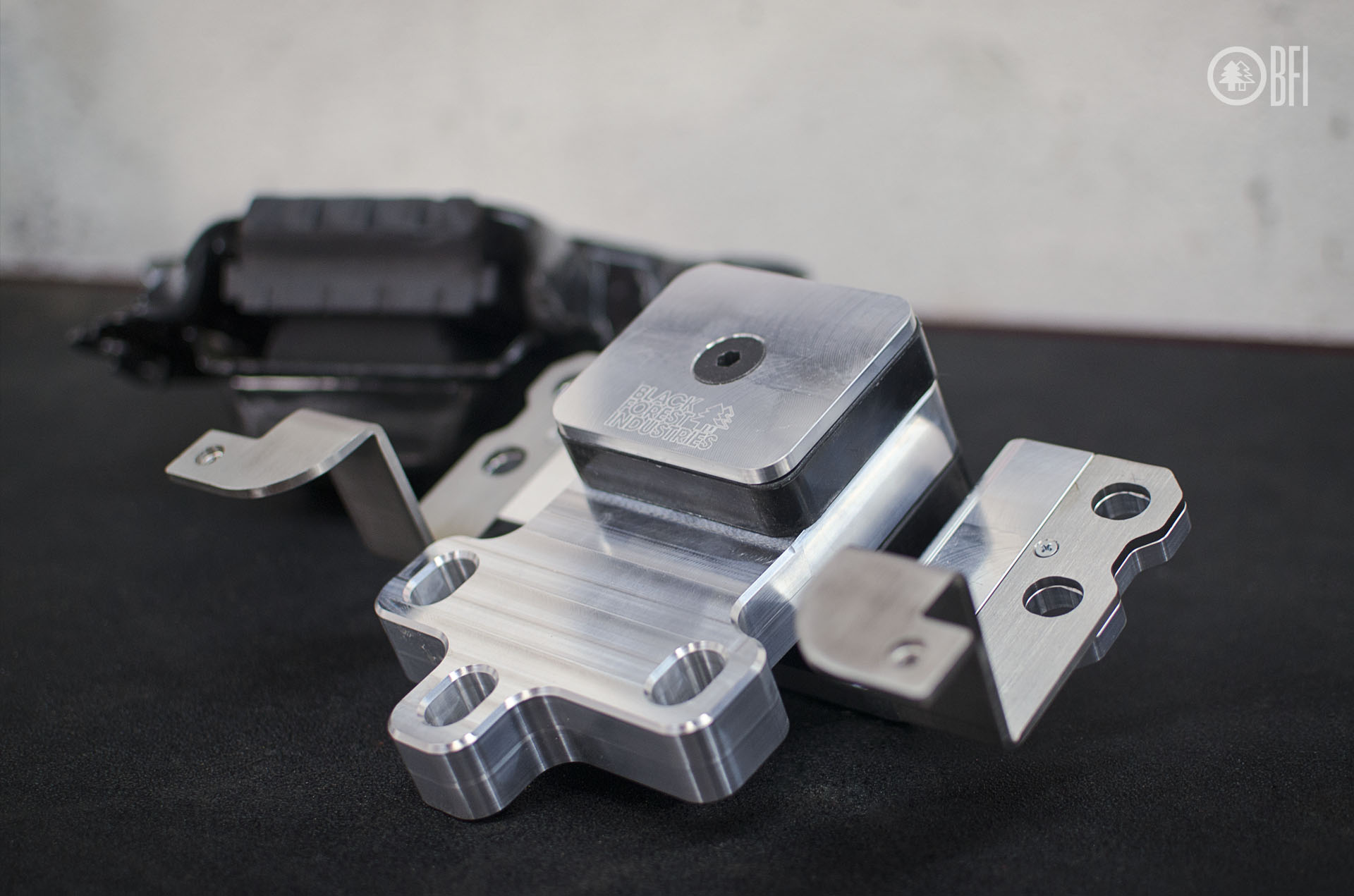 In addition to the engine mounts, we turned our attention to helping our 2.0T breathe just a bit better. Air flow plays an important part in making power, and there are a few somewhat restrictive parts that come stock which are simple enough to upgrade.  First and foremost we removed the factory airbox in favor of a BMS Elite Intake. It features a serviceable filter that has more surface area  due to its unique design which helps to feed  more air to your engine. Next up we replaced the turbo inlet as well as the turbo muffler with parts from Burger Motorsports. Both are designed to also allow air to more easily flow through your engine and turbocharger. While the gains are not nearly as substantial as software, the cumulative effect of adding these simple bolt-ons does help across the board. Maximizing efficiency is what it's all about and these small bits do their part. 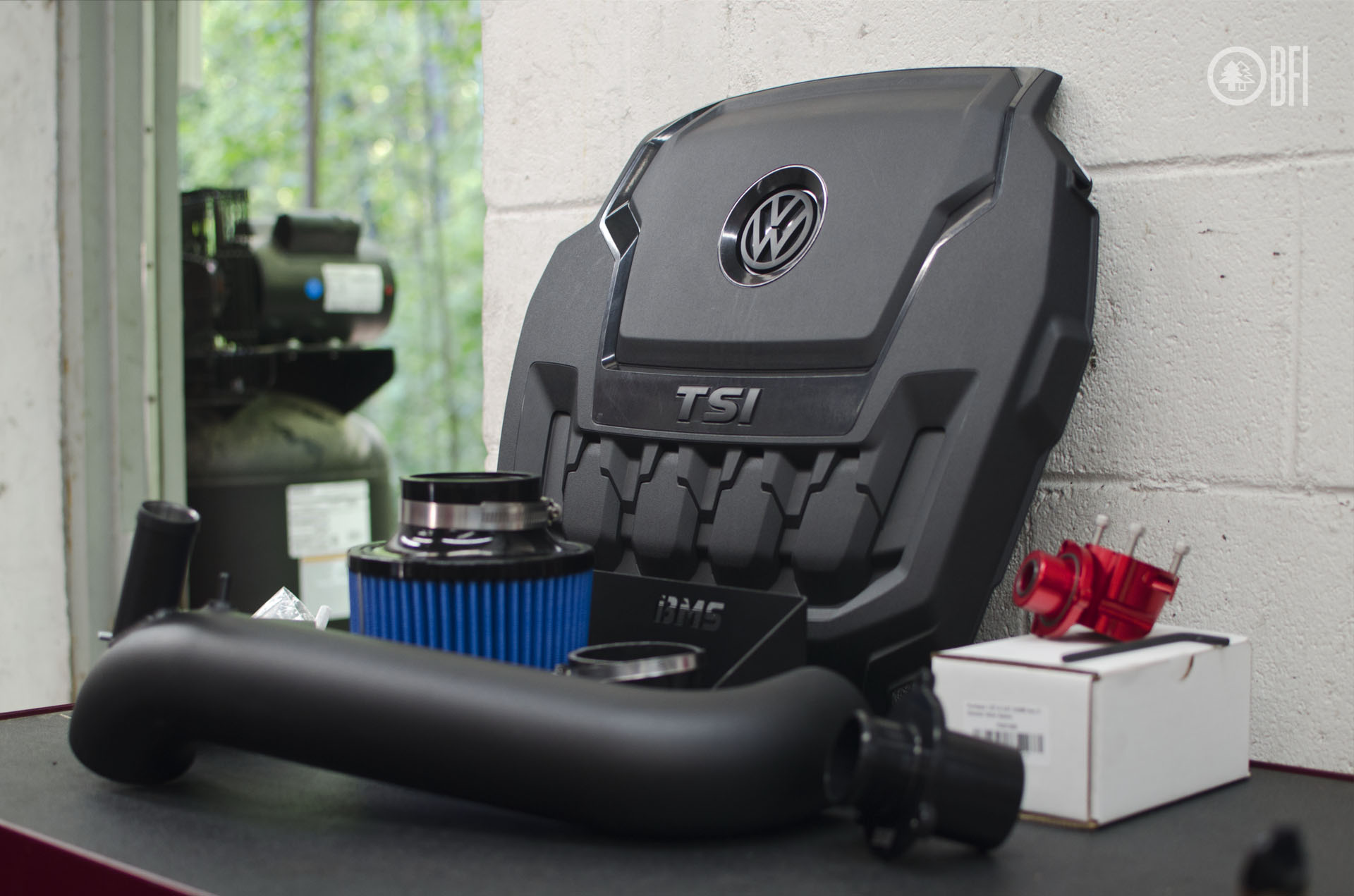 Finally, an affordable intake system worthy of your VW / Audi! The BMS Elite EA888 Intake retains everything that is good about the OEM intake including the cold air ducting and light weight heat shielding airbox bottom, but replaces the top end of the intake with higher flow ducting and a quality inverted cone air filter to match.  Unlike other intake systems on the market the BMS Elite EA888 includes a CNC machined high flow turbo inlet removing a critical restriction with the factory intake. All emissions fittings/hoses are fully retained providing a true no compromise intake solution.

n addition to freeing up some power turbo spool speed was improved, and there is an incredible sound improvement. You'll finally be able to hear your turbo spooling!

Installation is easy and fully reversible. Our proprietary high flow filter can be cleaned every 15-20k miles using a S&B cleaning kit and will last the life of the car. Our intake temperature testing found no significant difference from the factory intake during both sustained cruise and full throttle operation. Made in USA. 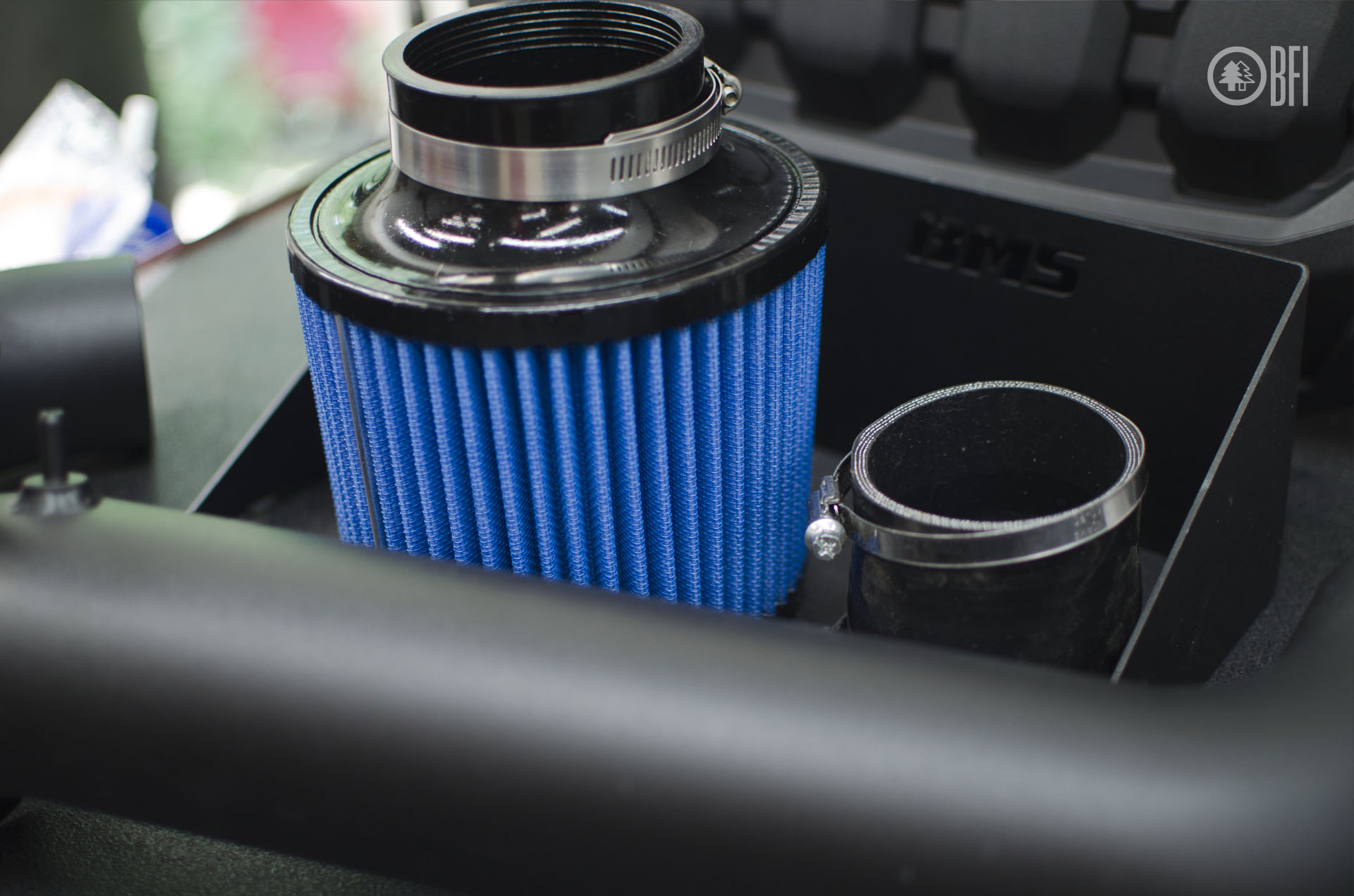 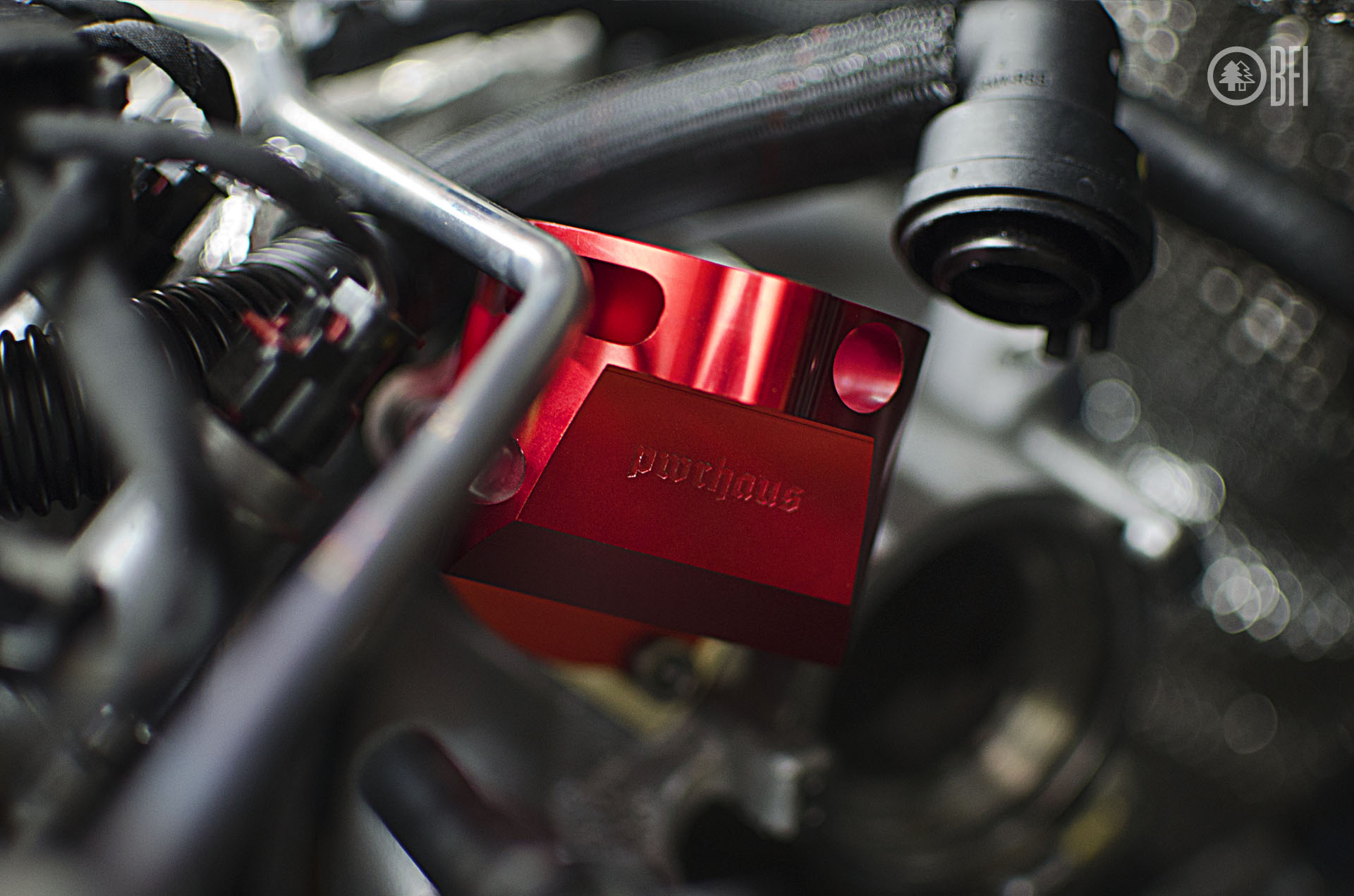 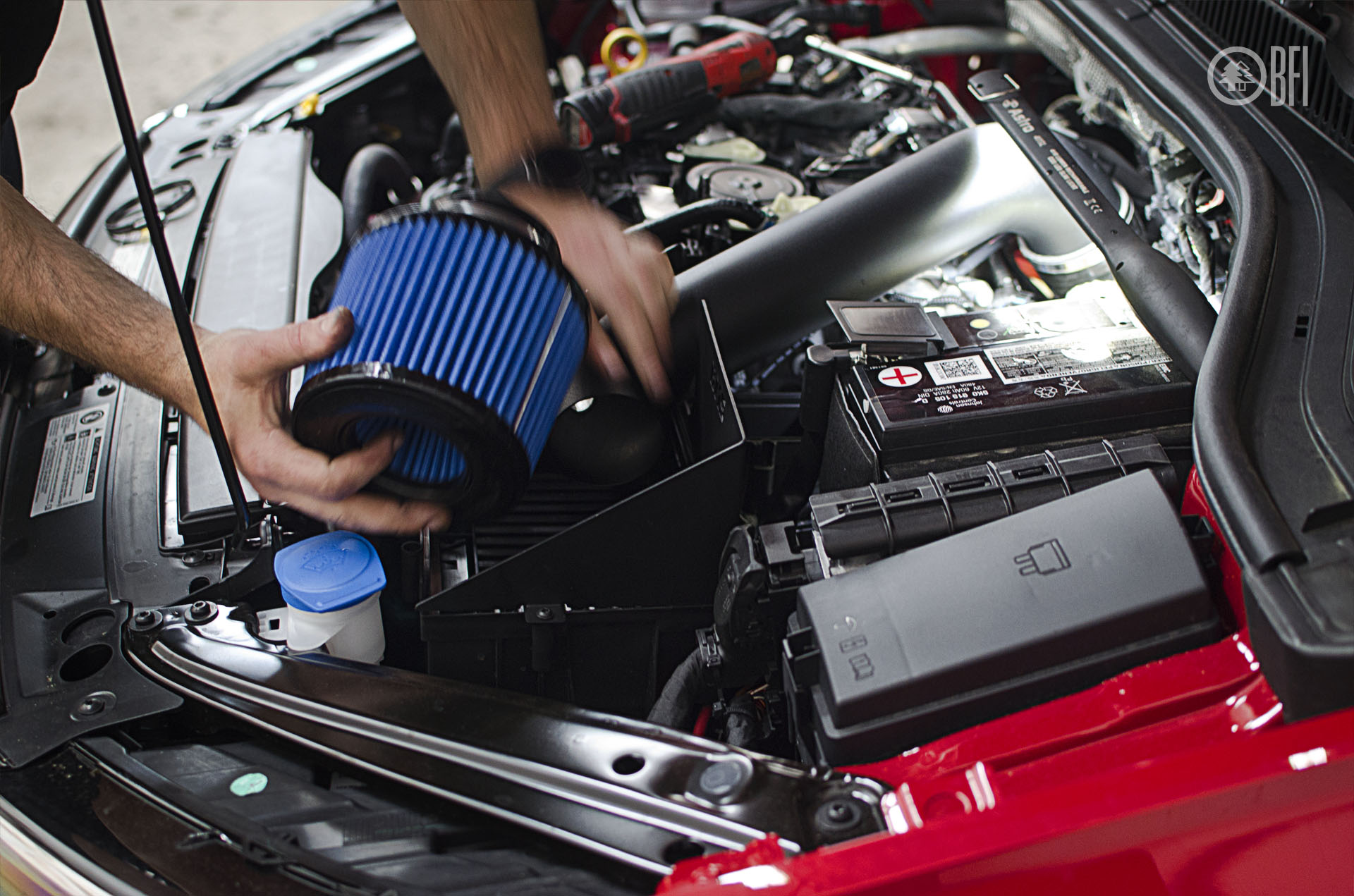 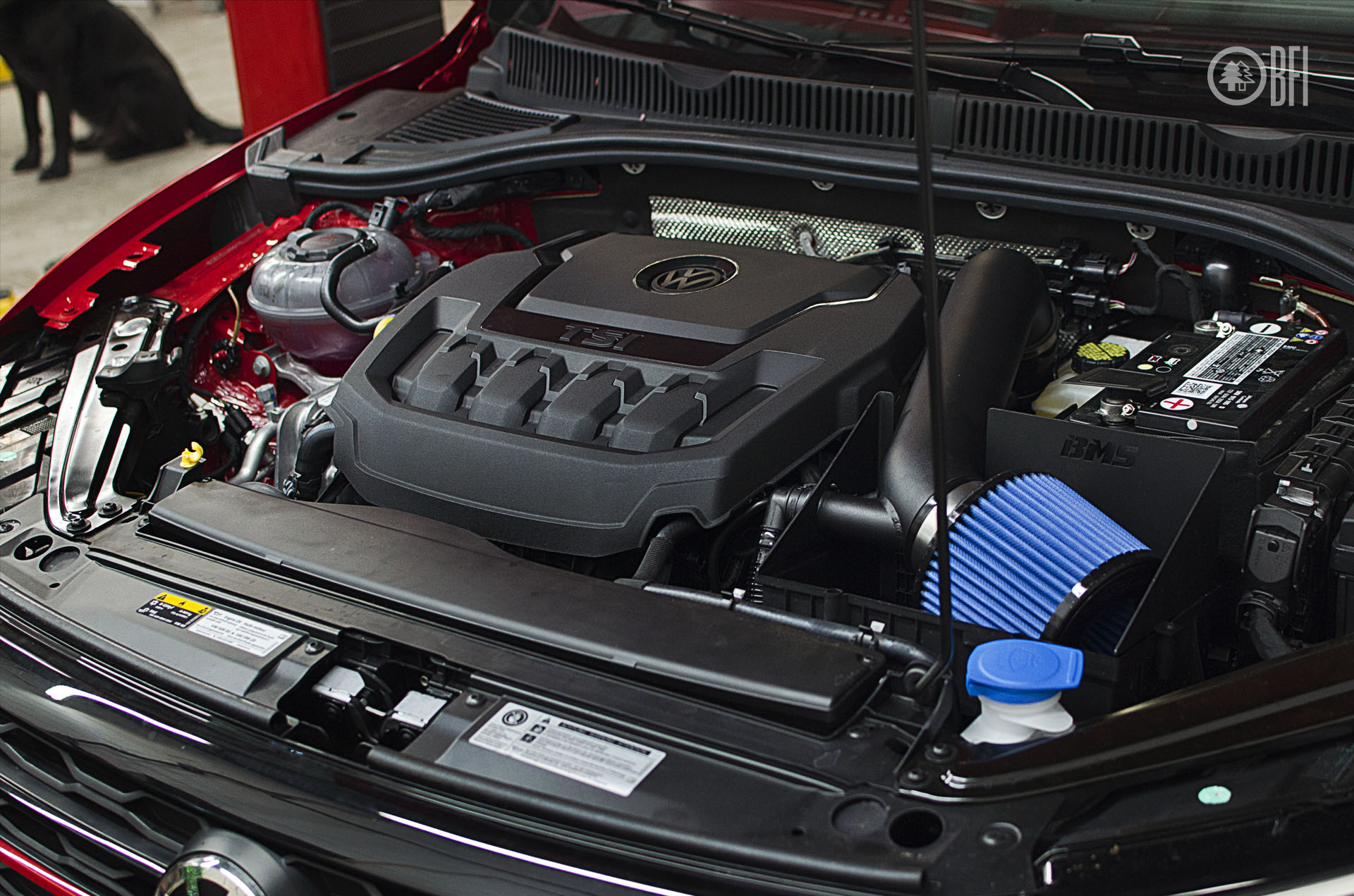 In a few simple steps, this car has been transformed from a mundane commuter into something much more fun. The added power and improved handling make this car much more rewarding to drive and not the obvious compromise that it was coming off of the dealer lot. The aggressive appearance is now backed up by true performance, and this car is now just as capable as many cars that are significantly more expensive.  We've always enjoyed just how much potential was available to tap into with the VW / Audi platforms, and also just how low the cost is relatively speaking.